The Baltimore Art, Antique & Jewelry Show, held August 24-27, was slimmer this year, down about one-third of the number of dealers from a year ago. The gate was down as well on a weekend with the most glorious weather of the summer. The majority of dealers said selling was good at setup but down at show time. A few said they sold better than they did last year. Those who came to the show on Friday were well-informed collectors who looked carefully, and many of them left the show with small packages.

This end-of-summer show is still a big show at the Baltimore Convention Center, but with 328 dealers it was possible to see it in just one long day. Half the dealers have shown here for generations and have a following. They send their customers complimentary tickets that serve as a reminder to attend the show. A few hundred were in line when the doors opened at noon on Friday. 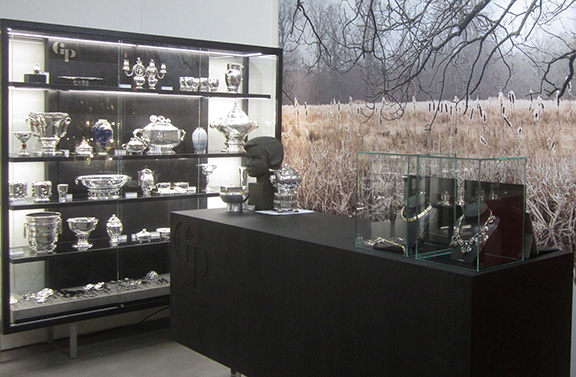 Greg Pepin Silver, Hellerup (near Copenhagen), Denmark, was a new stand on the red carpet. Specializing in Georg Jensen wares, Pepin and his partner, Ian Moore, offered vintage Jensen and made multiple sales from their stunning stand, including a lidded oyster dish designed by Henning Koppel in the 1960s. 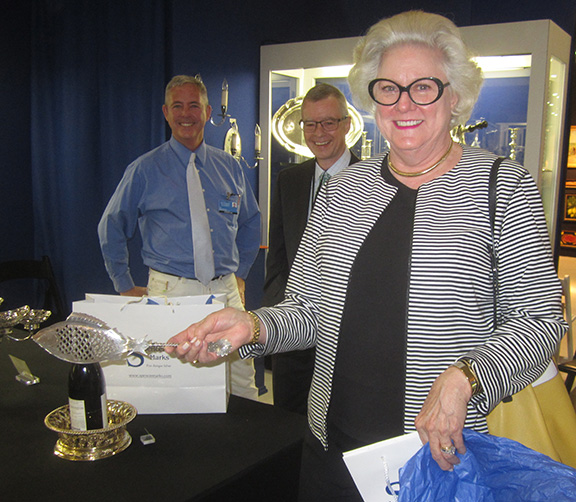 Mark McHugh and Spencer Gordon of Spencer Marks, Southampton, Massachusetts, look on as happy Heidi Hollomon shows a Dutch fish server she bought from them. 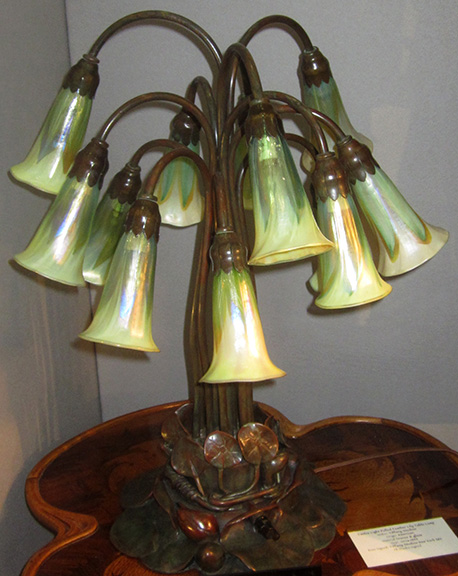 This American Art Nouveau patinated bronze and glass 12-light Lily table lamp is decorated with 12 Tiffany Favrile “pulled feather” shades set within a patinated bronze 12-stem Lily base. The shades are all signed “L.C.T.,” and the base is signed “Tiffany Studios New York 382.” It was $65,000 from Ophir Gallery, Englewood, New Jersey.

The show was more focused than in the past. The floor plan made it pleasant to shop. There were more places to rest, better food to eat in a large blocked-off area with tables and chairs, and an additional coffee bar near the book section.

The Antiquarian Book Fair section was much diminished, with fewer than a dozen booksellers and one print seller. Joshua Mann of B & B Rare Books, New York City, said he enjoys coming to Baltimore but finds it an expensive way to try to make money. “We like going to good restaurants,” he said. (We  hope he went to Pierpoint in Fells Point, Maryland, and ordered one of chef Nancy Longo’s smoked Maryland crab cakes and one traditional one. They are memorable.) B & B Rare Books made at least two good sales, a rare edition of Galileo’s Systema Cosmicum (Cosmic System) for more than $12,000 and a set of four first editions of A.A. Milne’s books, including When We Were Very Young, Winnie-the-Pooh, Now We Are Six, and The House at Pooh Corner, for more than $10,000.

Last year a few fine crafts dealers presented contemporary work, and this year that section of the show, called the Baltimore Fine Craft Show, was expanded. The 29 contemporary crafts dealers mostly sold to their regular clients, and they chalked up their experience at this show to advertising, hoping to hear from those who took their cards.

The center aisle with its red carpet was dominated by luxury goods—Hermès and Chanel handbags; Cartier, Van Cleef & Arpels, and David Webb jewelry; Chinese porcelain; China trade from international dealer Santos, London; and mainland Chinese treasures from TK Asian, Williamsburg, Virginia. There was a large selection of French art glass, plenty of Tiffany, and Art Nouveau furniture. Dealers offered less ceramics than ever before but more silver than last year. A newcomer, Greg Pepin of Greg Pepin Silver, Denmark, and his partner, Ian Moore, designed a stunning stand to present a collection of first-rate Georg Jensen silver—hollowware, flatware, and jewelry from every period. They sold well and plan to exhibit at other Palm Beach Group shows. Scott Diament, the Palm Beach Group CEO, was thrilled to have a new star among the 19 dealers new to the show this year, most of whom were dealers in the fine crafts section.

“I like the show a lot. It still has breadth and depth,” said Scott Diament, president and CEO of the Palm Beach Show Group, who is shown standing on the red carpet. He admitted that the 2017 show was two-thirds the size of the 2016 show. “It is more focused; there is less walking; the quality is up, less bric-a-brac. People want the extraordinary; it’s a reflection of the market,” he said. “There are three hundred twenty-eight dealers, nineteen of them new to this show.”

The design of the show provided plenty of spaces for sitting. The coffee bar was in the Antiquarian Book Fair section with 11 dealers.

Most of the art was of the sort popular in south Florida—large in scale and contemporary. Some of it sold, including a large copy of a van Gogh self-portrait made with folded paper torn from magazines. There were some American paintings from the 19th and first half of the 20th century; it was a hunt to find them. A few examples are illustrated. In addition to binoculars and fossils, House of Whitley, Dania Beach, Florida, offered crystals and minerals, and works by Christopher Marley, who assembles and frames harvested insects, sea creatures, plants, and stones. M.S. Rau Antiques, New Orleans, did not disappoint. Among its rarities was an 18th-century copying machine made in England that is like the one George Washington used at Mount Vernon. 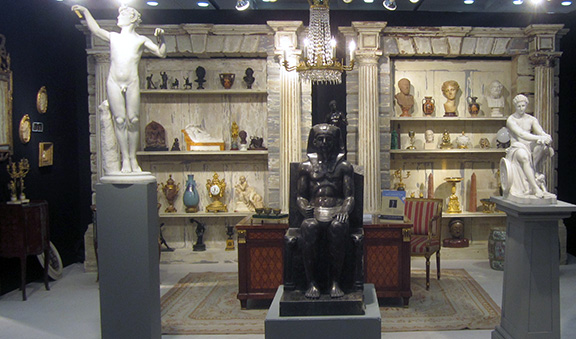 Nicolo Camisa of Nicolo Melissa Antiques + Art, New York City, offered Classical and Neoclassical sculpture and objects in a Classical setting. Dancing Faun (left) by Attilio Piccirilli (Italian/American, 1866-1945), carved white marble and signed by the sculptor, who carved Lincoln for the Lincoln Memorial, was on reserve for a museum.

Ron Van Anda shared a stand with his wife, Sandra J. Whitson, who specializes in figural napkin rings and patriotic jewelry. He wanted $12,500 for this Black Forest bear clothes tree. The house on stilts next to it is a pediatric dental cabinet priced at $8500. 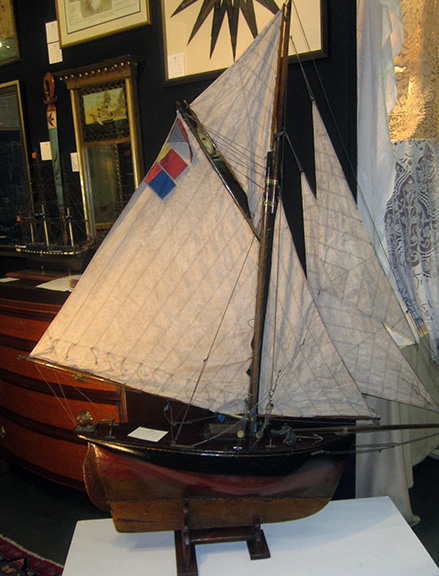 This Edwardian English pond boat with original sails and brass fittings, 1900-10, was $2500 from Ann Wilbanks of Find Weatherly, Stamford, Connecticut.

“It was a treat to come to an old-fashioned antiques show with a huge variety, and we found things to buy from dealers from Arizona and Kansas as well as such well-known specialists as Santos,” said Judith Hernstadt of New York City, a collector who said she looks forward to this show every year. In addition to adding two pieces of China trade porcelain to her collection and a pair of early New York tablespoons, she bought a small American sculpture.

The smaller show with better material for a more select audience and fewer sales seems to be a sign of the times. Dealers said the fact that presale buying and selling was good means that there is indeed life in the marketplace. Jacqueline Smelkinson and Marcia Moylan, who have had a permanent stand on the red carpet for years, said one-third of their sales were jewelry, one-third ceramics, and one-third miscellany ranging from tape measures to biscuit tins. They were thrilled to sell their Coalport dark blue fruit coolers with gilt decoration to a new customer from Baltimore.

Some good material was offered by knowledgeable dealers; a very small selection is illustrated here. Most of the dealers in art and antiques said they would be back in 2018. The management announced that in accordance with dealer requests they will return the show’s timing to coincide with Labor Day weekend. The dates will be Thursday through Sunday, August 30 through September 2, 2018. For more information, see (www.baltimoresummershow.com). 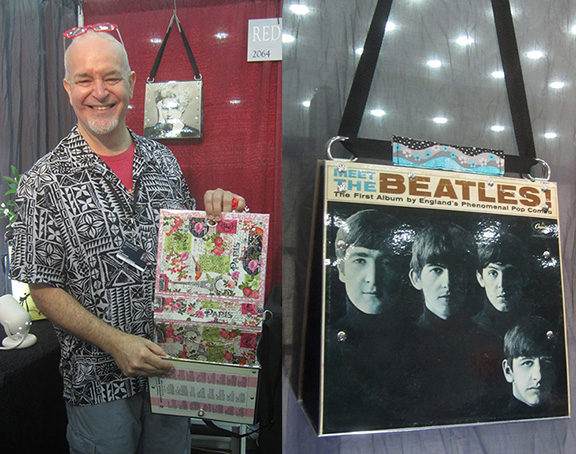 Raymond Ruggeri and Milton “Butch” Harrison are the creators of Rediscover Handbags, Chicago. They turn vintage album covers and programs into handbags. Small “Playbill” bags start at $225, album cover totes are $475, and album cover handbags with elaborate interiors go up to $600. This Beatles bag was $450. Ruggeri said he took orders for bags with favorite themes. He showed off the inside of the Angela Lansbury Dear World handbag. It was $400.

Bill Rau of M.S. Rau Antiques, New Orleans, Louisiana, said this is the world’s first copying machine. Another one like it was owned by George Washington and is at Mount Vernon. It was designed by the Scottish inventor James Watt, who wanted copies of his business partner Matthew Boulton’s correspondence. Made for easy transport, the machine comes complete with writing tools. Watt patented his invention of a steam engine in 1780 and sold 600 of them, according to a short video on the Rau website. Rau wanted $128,000 for the machine. He said Thomas Jefferson had a copier made 20 years later, an improved version. M.S. Rau Antiques photo. 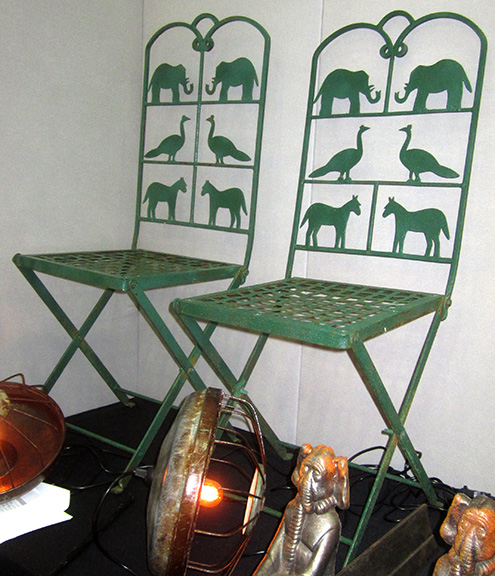 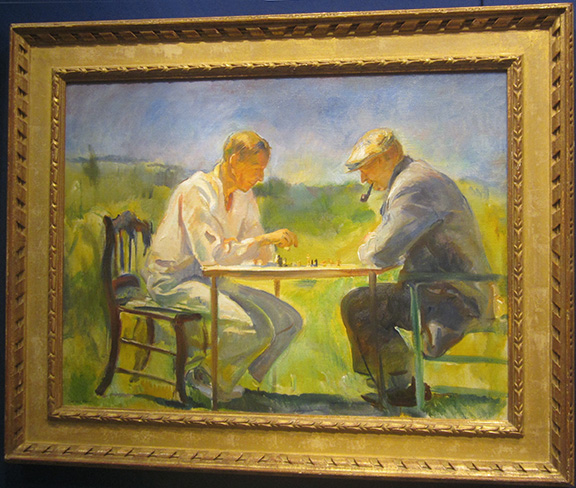 Chess Players on Monhegan by Alice Kent Stoddard (1883-1976), circa 1930, 24" x 32", oil on canvas, was $35,000 from David David Gallery, Philadelphia and Palm Beach, Florida. Stoddard trained at the Pennsylvania Academy of the Fine Arts, and lived and painted on Monhegan Island in Maine, where she bought the cottage of her cousin Rockwell Kent.