Collectors at different levels were given an opportunity to view and buy art—paintings, sculptures, mixed media, ceramics—at the 28th edition of the Outsider Art Fair, and they did so with gusto.

The four-day show, held January 16-19 at the Metropolitan Pavilion on West 18th Street, has been managed for the last eight years by art dealer

Andrew Edlin’s Wide Open Arts, LLC, and the organizers continue to improve it. This year, for example, the floor layout was tweaked to improve traffic flow and render better exposure to the 65 booths, large, medium, and small corner ones. The restaurant was moved from the front of the space to the back, which gave patrons more space to eat, drink, and hang out longer.

“The change in the layout definitely helped,” said Rebecca Hoffman, fair director. “The aisles are more open, which gave people more space, and more sales were made.” 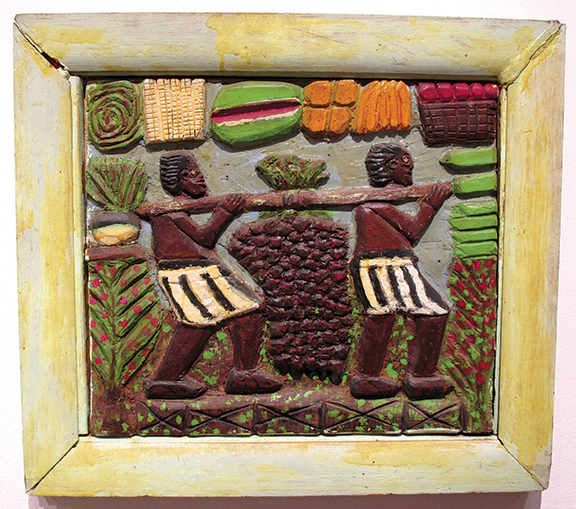 “The bar is being raised,” said dealer Frank Maresca, a longtime exhibitor who also sits on the fair’s advisory committee. “It’s improved in terms of restraint,” he noted, pointing to less “overhanging” of booths and more pieces being offered in frames.

“I would call it a trickle-up effect,” he said. “Dealers from around the world—not giants, more mom and pop, which is okay— don’t have the capitalization that the big boys and girls have, so they’re doing things on a shoestring. They look around at their neighbors’ booths, and they’re doing a better job.” 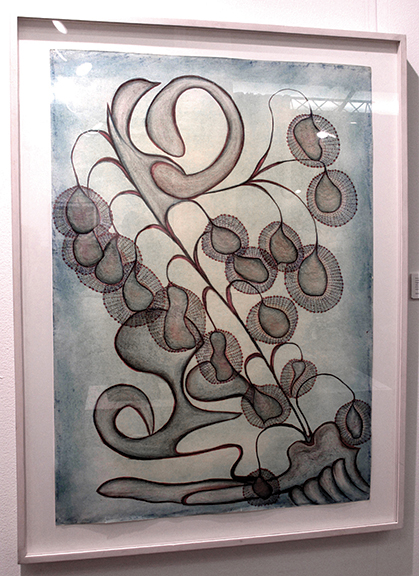 Early access to the fair began on Thursday afternoon from 2 to 6 p.m., followed by a vernissage until 9 p.m. The day was well attended, and many sales were made—ranging from hundreds of dollars to tens of thousands of dollars. The following day, usually a quiet one for most fairs, was busy. The pace continued through Sunday, which drew crowds on the final day looking to buy.

Collector Jerry Lauren stopped in to see what this year’s exhibitors were offering and to talk with the dealers. “Outsider art has come into its own,” the longtime collector told M.A.D. Two days before his visit he had purchased a very important double-sided work by Bill Traylor (1853/54-1949) at Christie’s Outsider art auction for $507,000, an auction record for the artist, bringing Lauren’s collection of Traylor artwork to 21 pieces.

Commenting on the fair, Lauren said, “You don’t have to pretend you’re an art expert here. Buy what you love. It’s a wonderful opportunity.”

Carl Hammer of Carl Hammer Gallery, Chicago, a longtime exhibitor, offered works by Joseph Yoakum, Lee Godie (the bag lady of Chicago), Eugene Von Bruenchenhein, Frank Jones, Bill Traylor, and others. “Last year we sold twenty Yoakums!” The gallerist displayed a few works by Yoakum this year and had already sold two. “It is getting harder and harder to find new and good material,” Hammer noted.

The Outsider Art Fair will return to Paris for its eighth edition October 22-25, to be held at Atelier Richelieu. Further information on the New York and Paris shows is available at (www.outsiderartfair.com). 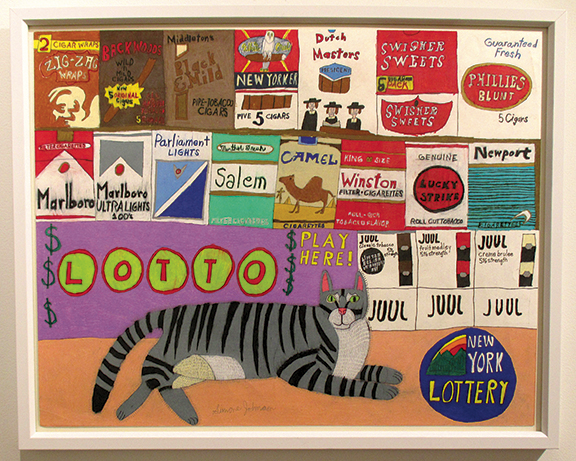 New York City Bodega Cat #1 by Simone Johnson (b. 1971), ink and colored pencil on paper, was available from Pure Vision Arts, New York City, tagged $2500. It is one in a series of bodega cats by the artist. 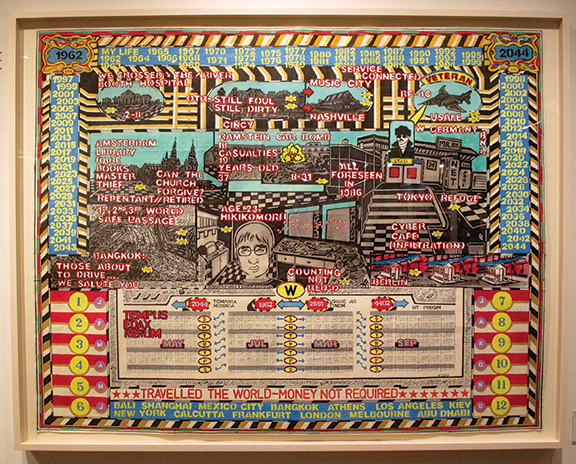 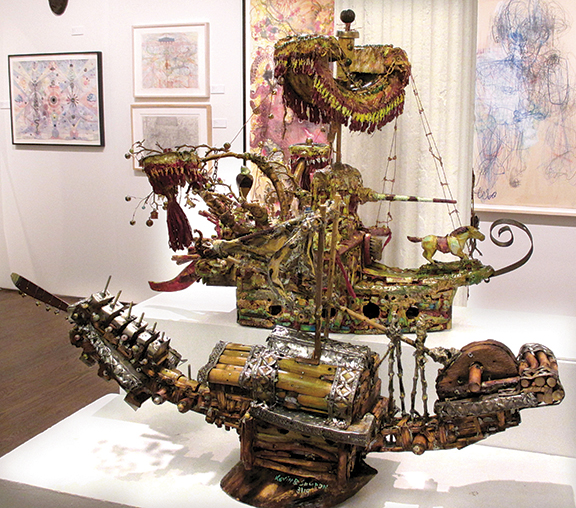 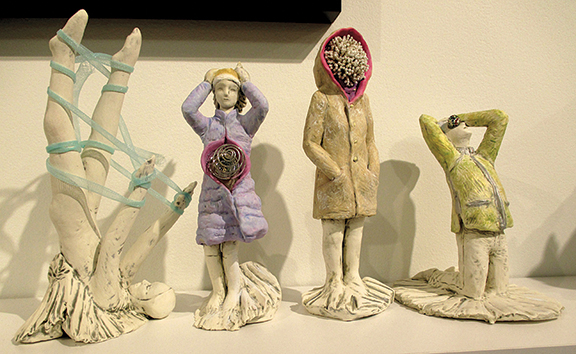 Jordan Laura MacLachlan, born in 1959 in Toronto, Canada, has over the last 30 years created the multi-part terra-cotta and mixed-media series “Ways of Living.” Seen here are a few examples of the most recent series, “Animal Vegetable Mineral,” which was featured at the booth of Marion Harris, New York City. The figures ranged in price from $1200 to $1500. 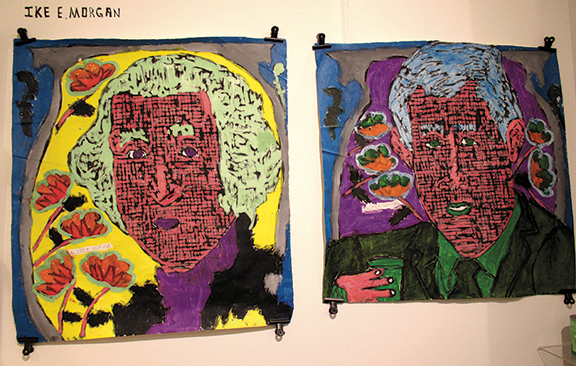 Ike E. Morgan (b. 1958), an Austin, Texas-based artist who spent over 20 years in a state hospital because of schizophrenia, focuses primarily on U.S. presidents. Seen here are Morgan’s interpretations of George Washington and George W. Bush, available from SAGE Studio, Austin. Both paintings are acrylic on raw canvas, priced at $850 each. Morgan is represented by Webb Gallery, Waxahachie, Texas. 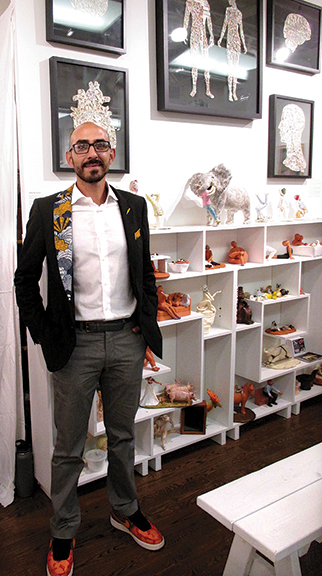 Dealer Marion Harris of New York City introduced works this year by French/American artist Joanathan Bessaci, seen here. The young man’s grandfather was a collector of Michelin maps, and he accompanied him to flea markets. Bessaci began as a painter but stopped several years ago and began “cutting” the maps he inherited. He continues to buy maps to make his art. He has created a dancer series, a politician series, and a sports series. His anatomical series can be seen on the wall behind him. Prices ranged from $2500 to $6500. 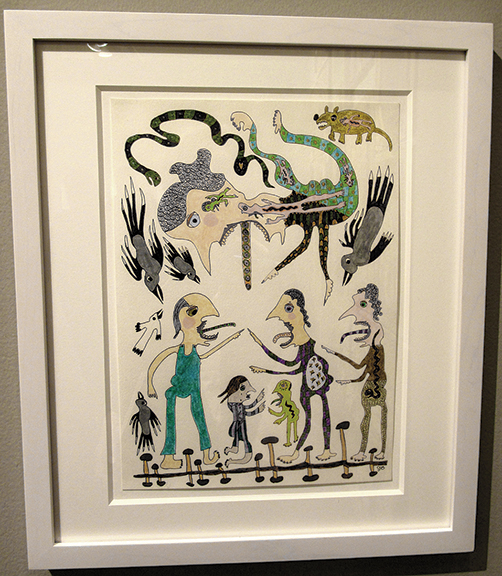 Jeanne Brosseau, born in the Penobscot, Maine, area in 1952, uses her drawings as therapy from long-suppressed memories of sexual abuse by her father, explained Thomas Parker of Hirschl & Adler Modern, New York City. “She’s a new discovery for us.” Seen here is The Gossips, 2018-19, colored ink marker on paper, 12" x 8?", priced at $6000. “Her works are at an inflection point when therapy art becomes fine art,” said Parker. “On a visceral level and an artistic level, they are undeniably beautiful.” Brosseau’s works ranged in price from $4000 to $6000. Some sold. 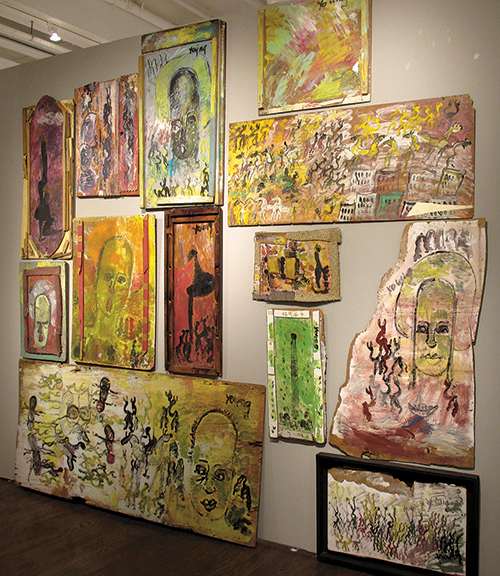 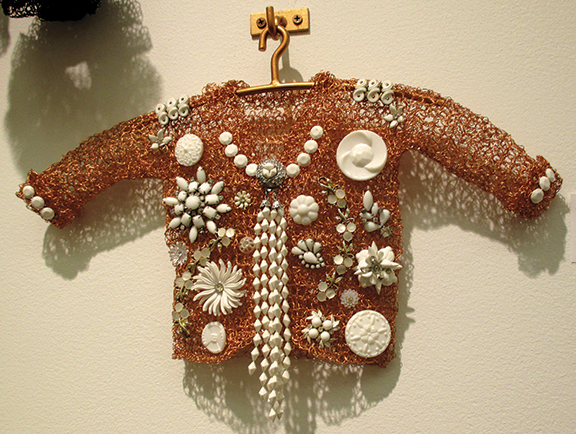 Artist Donna Rosenthal (b. 1950) comes from a family of store display designers and jewelers. Seen here is 50’s Love, crocheted metal, 17" x 11" x 2", priced at $3500 by Koelsch Gallery, Houston, Texas. Rosenthal, who is from New York, crochets dresses and coats from big spools of metal—silver, copper, gold, and brass. “Silver is the softest, gold is harder, and brass is the hardest,” she explained. She also works in paper. 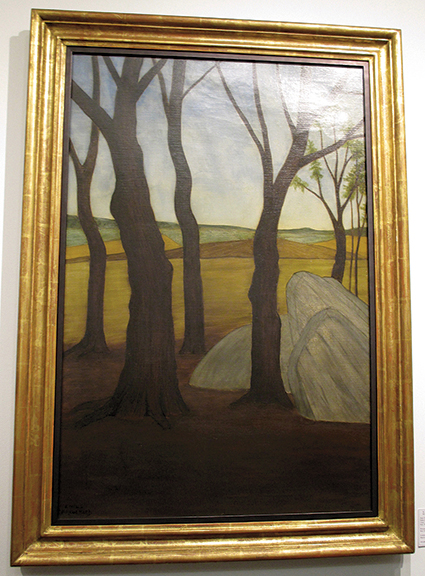 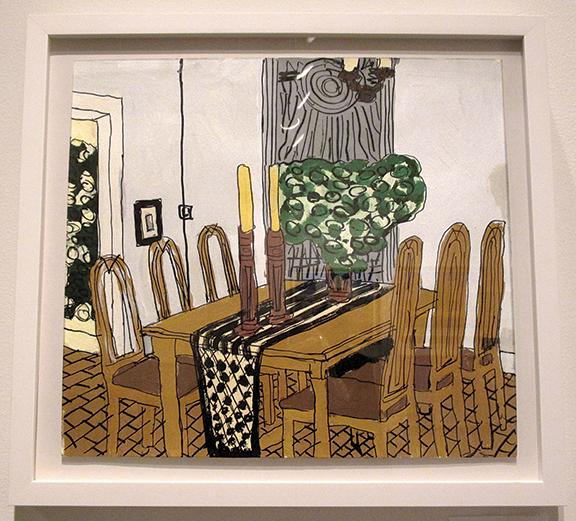 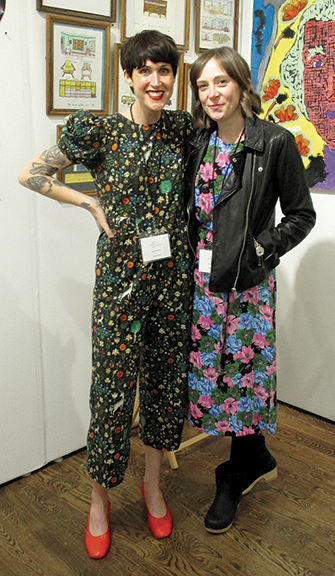 Lucy Gross, on the left, and Katie Stahl of SAGE Studio, Austin, Texas. 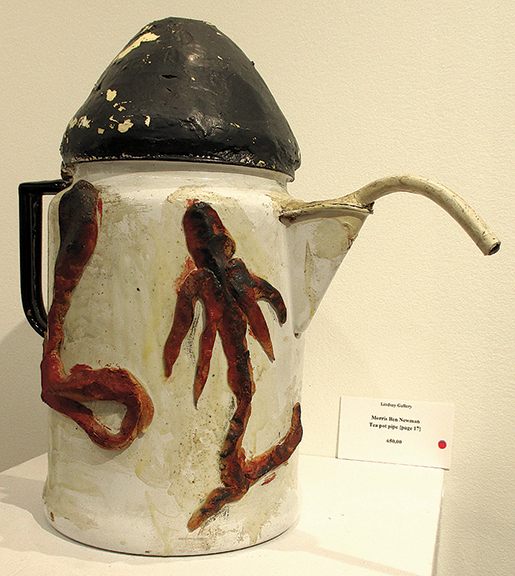 Duff Lindsay of Lindsay Gallery, Columbus, Ohio, sold this teapot pipe with applied body putty by Morris Ben Newman (1883-1980) to a museum. The gallerist brought a dozen paintings by Newman to the fair, and half of them sold within the first three hours, he said. 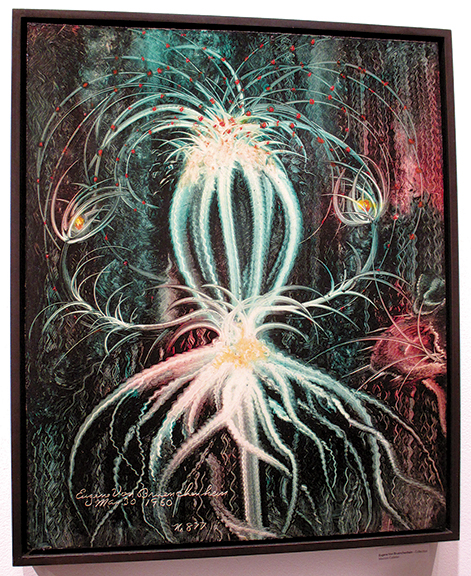 The curated space at the fair “Relishing the Raw: Contemporary Artists Collecting Outsider Art,” exhibited works by Outsider artists collected by contemporary artists. Those lending work from their collections included Polly Apfelbaum, Maurizio Cattelan, Julian Schnabel, Cindy Sherman, KAWS, and others. Seen here is No. 877, May 39, 1960 by Eugene Von Bruenchenhein (1910-1983). The 24" x 20" oil on board from 1960 is from the collection of Maurizio Cattelan. The space was curated by critic, editor, artist, and lecturer Paul Laster. 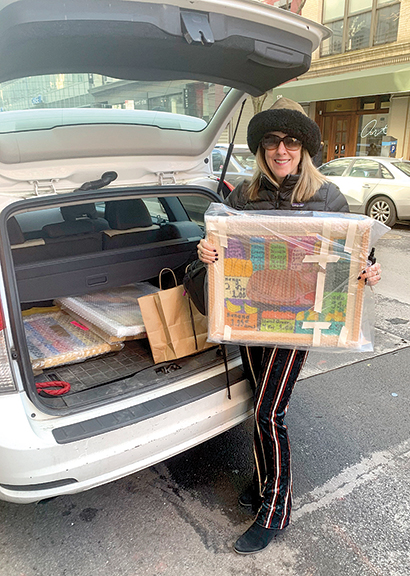 Paula Burns of Barrington, Rhode Island, has made a pilgrimage to the Outsider Art Fair for the last several years, spending the weekend viewing and buying what she loves. She was packing the car with her purchases when M.A.D. returned to the fair on Sunday. 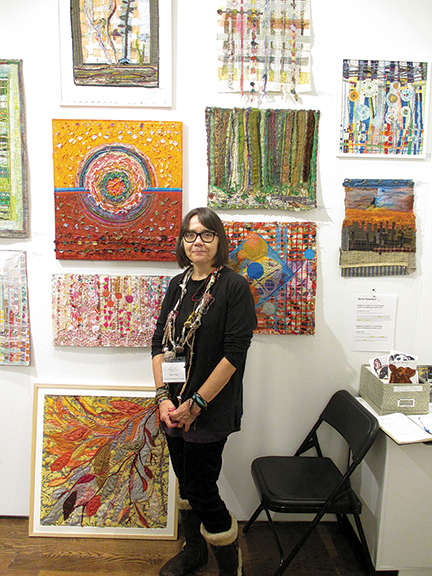 Alyson Vega, a textile artist whose work is shown through Fountain House Gallery, New York City, in front of some of her work. 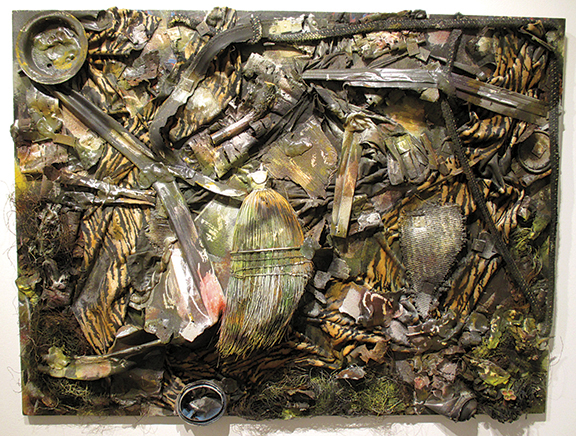 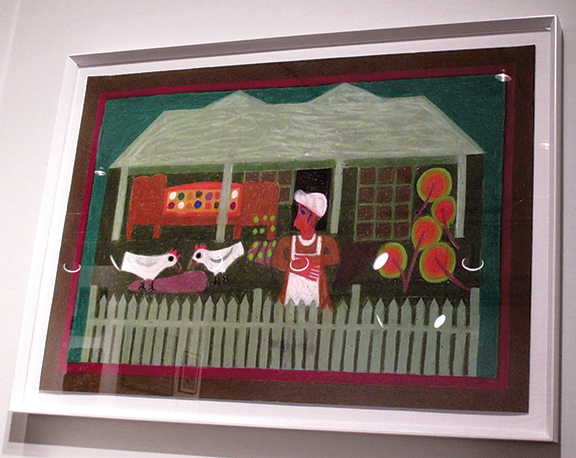