While hundreds of thousands of pilgrims headed for Philadelphia, hoping to see Pope Francis, hundreds of antiquers went to York, Pennsylvania, in search of their holy grail: the missing dish, urn, clock, cupboard, or painting that would complete a room, a shelf, or a collection.

Melvin “Butch” Arion’s 165th semiannual original York Antiques Show and Sale filled the York Fairgrounds Convention and Expo Center’s Memorial Hall East, September 25-27. Instead of a two-day setup, there was just one day for the dealers to install their stands and do some serious shopping. Selling was brisk at the setup on Thursday and when the show opened at 10 a.m. on Friday, but when the Pope arrived in Philadelphia on Saturday, the crowd thinned. Those who live in Philadelphia could not get out of town, and others were afraid there were be traffic tie-ups on the Pennsylvania Turnpike (there weren’t any), but those who drove to York from the south and west had no problem getting there. There is always a big contingent from Baltimore, just a 45-minute drive away.

An enthusiastic crowd came on Friday, and though the attendance was down on Saturday and Sunday, business was done. There was real energy and spirit at this show. Some dealers said they sold well, and others complained that business would have been better if more people had come.

One young collector, mentored by Washington, D.C., collector Martha Bartlett, bought an oval hutch table from Stephen-Douglas, a white-painted metal chandelier from Steven Still, and a set of six black-painted Yorkshire chairs from Dennis and Valerie Bakoledis, nearly finishing a room. Just think what it would do for the antiques business if every advanced collector would mentor three or four young collectors as Martha Bartlett does. That should be every old-time collector’s resolution for the new year.

The roster of dealers at York was impressive indeed. A group of dealers from New England joined an even larger group from Pennsylvania. This year only three dealers were new to the show; no one wanted to miss it.

Scott Buchanan of Pottstown, Pennsylvania, said his day job is as a policeman, but he has been dealing in antiques for years, and he sold half a dozen pieces of painted furniture and more his first time exhibiting at York. J.R. Cordrey and Ryan Fox of Stiles House Antiques, Woodbury, Connecticut, came on short notice when the Fassnachts of Canandaigua, New York, could not come. Sally and Al Good’s children rented a beach house to celebrate their anniversary, so they gave up their space in the foyer to Joe Krisky of Kugel Obsession, Beaverton, Oregon.

Krisky wrote a big book, Kugels: A Christmas Obsession, about these silvered glass Christmas balls in a variety of colors and forms, which were made in Germany, Austria, Czechoslovakia, France, and Japan from the 1880s to the 1930s. He said he came to York to network and to meet collectors and dealers as much as to buy and sell. Krisky thinks that he has the largest collection, about 600 kugels. He knows a man in the East with 400 and thinks that Leslie Anne Miller illustrated 100 or so in her 2014 book Start with a House, Finish with a Collection, which introduced kugels to many for the first time.

Old-time collectors have been amassing kugels for 50 years; Krisky cranked up the level of collecting in the last decade and put it into high gear on his Facebook page three years ago. The market reached a record level at the Conestoga Auction Company auctions of the Harry Hartman collections when kugels brought $6490 for a 4½" high red grape cluster and $5900 each for a 4½" high blue grape cluster and a gold grape cluster (sometimes called pineapple) at the first auction this spring. At the second auction this summer, a 4" high blue ribbed pear sold for $21,240, and a 3¾" diameter red ribbed ball sold for $7670. Many of the common forms sell at a small fraction of those prices.

Krisky said he is not trying to corner the kugel market. “I am just trying to open the international market,” he explained. He is gathering more information for a second book because he has found 120 kugels to add to those already identified and classified according to rarity in his first book, now out of print. His presence at the York show, a country show at a crossroads in Pennsylvania, was a platform that this master marketer used to expand his network. 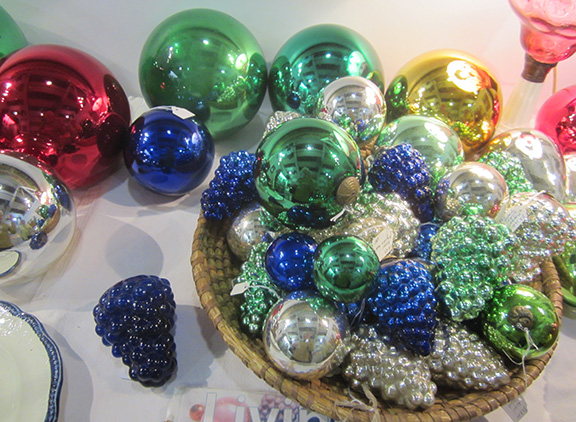 Ruth Rogers of School House Farm Antiques, New Holland, Pennsylvania, offered a large selection of glass kugels. Among the most expensive was a large gold grape cluster priced at $2250; smaller silver, blue, and green clusters of grapes ranged from $250 to $600. Red kugels are rare. The largest red one was $2000, and a large purple one was $1800. Small round kugels cost from $100 to $300 apiece, depending on size and color. 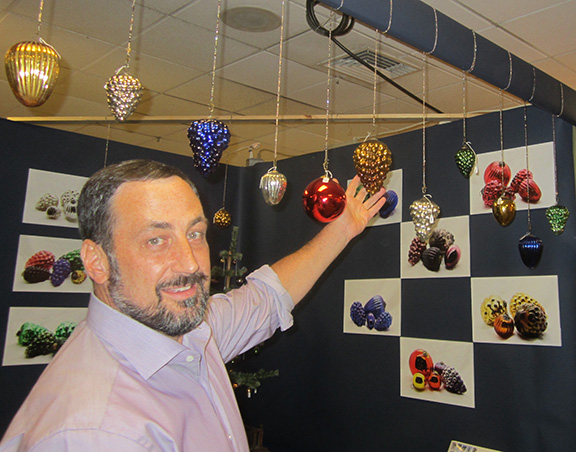 Joe Krisky of Beaverton, Oregon, a dealer and collector of kugels (glass German Christmas balls), took a booth for the first time at the York show to broaden his network of kugel collectors. He sold 17 kugels, bought several, and said he met some collectors who might want to sell their collections. He wrote Kugels: An Antique Christmas Obsession (2012), which illustrates all those forms he had found and indicates rarity. He discovered kugels in 2005, when he couldn’t find enough large balls to decorate his 17' high Christmas tree, and has been collecting ever since.

He said he discovered Ruth Rogers of School House Farm Antiques in 2008 when Martha Stewart published a story on kugels in her December 2008 Martha Stewart Living magazine and mentioned Ruth Rogers in her credits. Rogers has exhibited at York shows for years and has been a major source and resource for Krisky, who has been a bidder at the auctions of Harry Hartman’s collections, where kugels have sold for record prices. He published some of Hartman’s kugels in his book.

The York antiques shows serve an important function in an antiques marketplace that is increasingly retreating online. Nothing beats seeing and touching an object, turning it over and holding it in your hand, and having someone with knowledge at hand to talk about it. 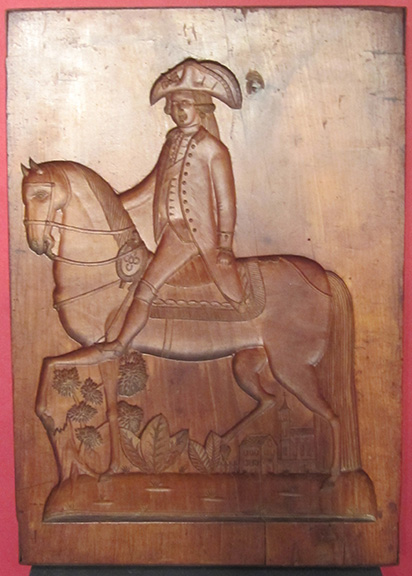 Richard Axtell of Axtell Antiques, Deposit, New York, asked $10,500 for the George Washington cakeboard that he had bought during setup. It sold. 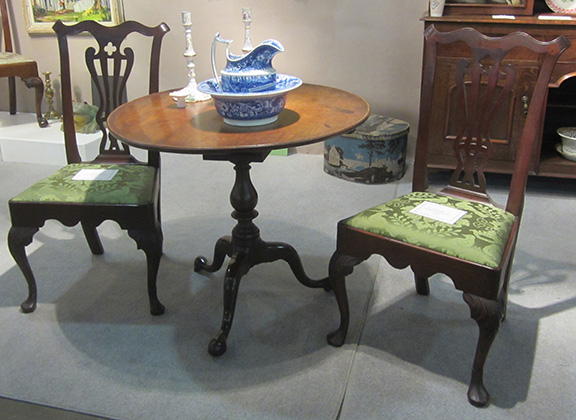 James Kilvington of Greenville, Delaware, asked $5500 for the Chester County, Pennsylvania, tilt-top tea table, circa 1765, with original casters. The pitcher and bowl set with a transfer print of the Upper Ferry Bridge across the Schuylkill River in Philadelphia was $1550. The pair of Battersea candlesticks was $2900. The pair of Maryland or Virginia late Queen Anne side chairs, circa 1760, with pierced splats, scalloped skirts, carved knees, and ears on their yoke crests was $10,500 (six identical chairs with a family history are in a collection in Prince George’s County, Maryland). 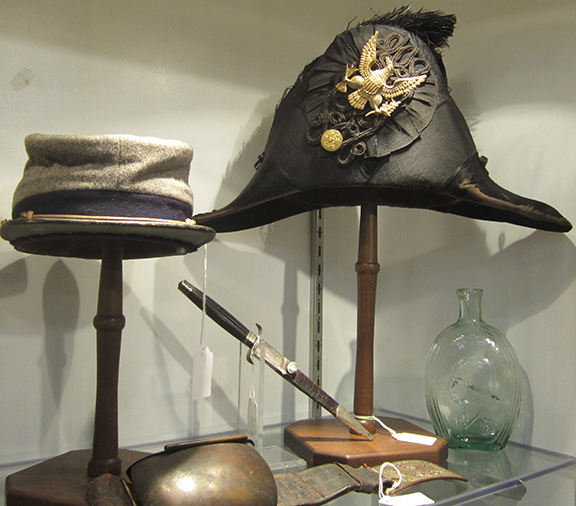 Scott Ferris of J & R Ferris Antiques, Boonville, New York, asked $1125 for the 1820-30 American naval chapeau, which sold, and $1150 for the post-Civil War kepi made by the Lilly Company for the Confederate Veterans of Ohio. The metal cartridge case marked Kittredge & Co., Cincinnati, Ohio, and fastened to a belt with an eagle belt buckle was $2450; Kittredge & Co. was a Civil War gun dealer. 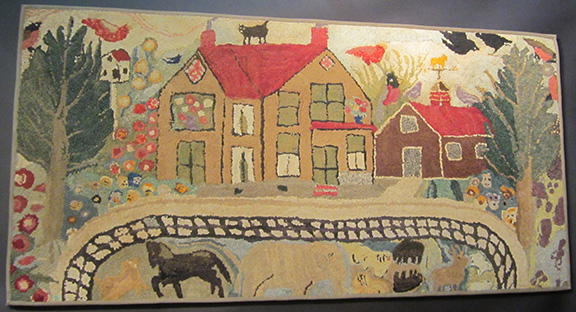 Jewett-Berdan, Newcastle, Maine, asked $7500 for this hooked rug with a cat on the red roof, a horse, an elephant, and birds in the sky. 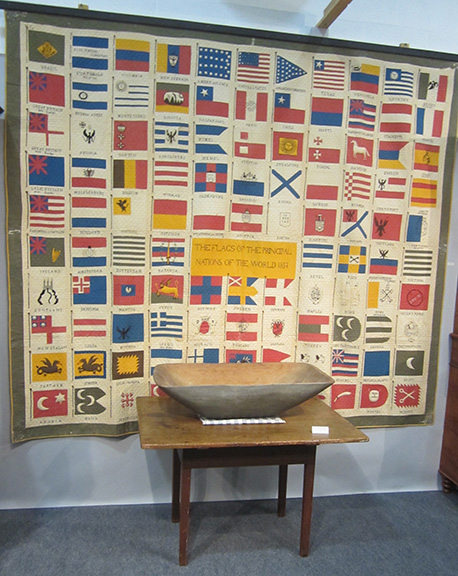 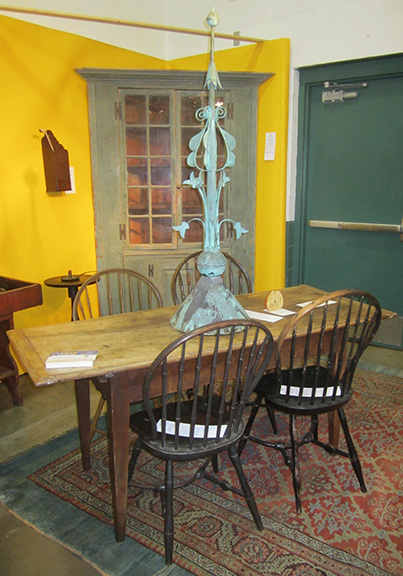 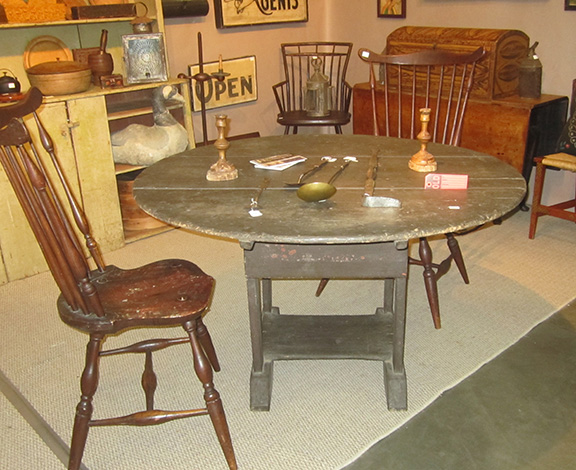 What sold? This hutch table with an old dark surface did. It had been made in Maine and was bought recently at an auction in Kennebunk, Maine, by Stephen-Douglas, Rockingham, Vermont. The buyer of the table was a young collector mentored by Martha Bartlett, a Washington, D.C., collector known for her keen eye and good taste. Stephen-Douglas asked $8900 for the pair of large fan-back Windsor chairs in red paint. 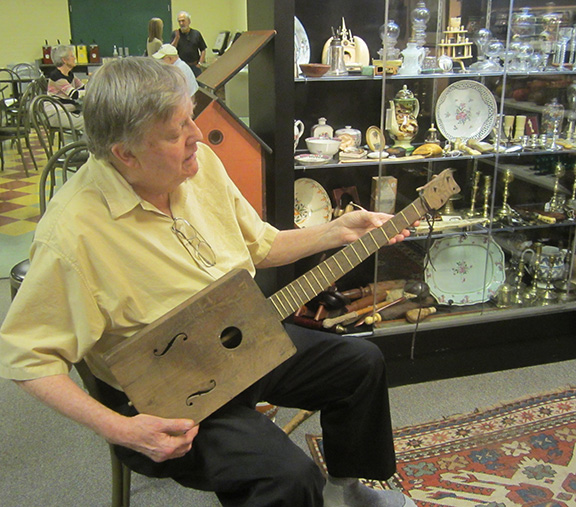 Paul DeCoste of West Newbury, Massachusetts, asked $6500 for a Civil War era banjo inscribed  “Used by Thomas Brownley, Battery A, 3rd Pa Heavy Artillery, Nov 28, 1862, Mustered out 7/11/65 and fought in the battles of Gettysburg and Plymouth.”