Numbered 1 and 2, the set features the work of L.D. Nimschke, a master engraver of the 19th century. The ivory grips are carved with Grant’s portrait. The set came in the original rosewood case with the full complement of accessories.

According to the catalog, the pair was presented to Grant by Otis Nelson Cutler and William C. Wagley, both veterans of the Mexican-American War. Wagley was a 2nd lieutenant in the 3rd Dragoons, and Cutler was a captain in the Massachusetts Regiment of Volunteers. 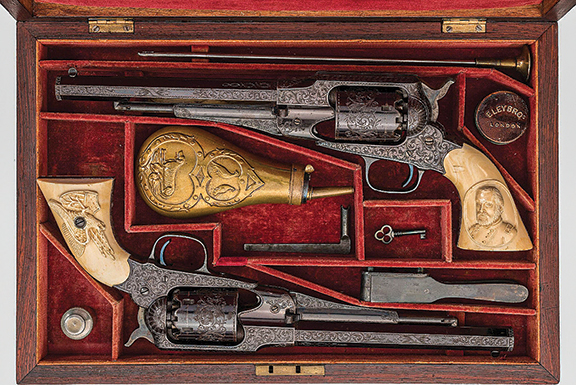 Cutler was an orderly sergeant in the 1st Massachusetts Volunteers in 1846 under General Taylor and was later promoted to captain. He formed a company of men to explore for gold in California, where he met with success. He later built a home on the family farm in Lewiston, Maine, and he was contracted to build the Hannibal & St. Joseph Railroad in Missouri. He moved there, lived in Hannibal, and became the superintendent of the railroad. At the end of the Civil War, Cutler was assigned as a special treasury agent stationed at New Orleans.

Wagley worked in the river trade in Louisiana after the war and is recorded as commanding steamboats running to Mobile and Montgomery in at least 1865 and 1866.

In the September 2018 American Rifleman, firearms author S.P. Fjestad noted that the revolvers were “without a doubt...the most elaborate and historically significant set of currently known revolvers manufactured during the Civil War.”

Fjestad also concluded that this cased pair was “a ‘thank you’ for a wartime cotton-smuggling scheme.” Rock Island noted in the catalog that “Grant’s participation” in the Louisiana cotton trade was “not as nefarious as Fjestad’s comments imply.”

Fjestad believed that Cutler and Wagley likely ordered these revolvers through Schuyler, Hartley & Graham of New York City. The retailer contracted L.D. Nimschke of New York City to execute the embellishment. “The overall cost of the extravagant gift was no more than $400, with the revolvers’ original value at about $12 each.

The set could have been picked up or delivered to a specific location as per Cutler and Wagley’s request,” Fjestad wrote.

Where and when they were presented to Grant is unknown.

The set remained with the Grant family for decades. They are believed to have been taken to California in the late 19th century by either Ulysses Grant Jr. or Jesse Grant II. They were reported to have been given as payment to a handyman who worked on Jesse Grant’s home (also known as the Julia Grant home) around the time of the Great Depression. That man kept the revolvers for many years.

The family was eventually convinced to sell the revolvers in 1976. A January 6 statement by Richard Hatch notes that his father, Frank L. Hatch, had been pursuing these revolvers in the early 1960s when they were in the possession of Mel Reynolds of San Diego, son of the handyman. His father stayed in regular contact with Reynolds after learning of the revolvers in the 1950s and reminded him of his interest. Frank Hatch purchased them after around 20 years in 1976.
Richard Hatch indicates that he drove his father on December 26, 1976, to purchase the guns at Reynolds’s house. A sales receipt dated December 26, 1976, records that Bill and Mel Reynolds “Received from Frank L. Hatch $1,500 for a pair of engraved Remington pistols.”

After Frank Hatch died in 1987, the revolvers remained with his wife until she moved into a care facility in 2002. They were transferred into the possession of Richard Hatch, who inherited the pair when his mother died in 2013. They remained hidden for several years until they were put on display for the first time in Las Vegas in 2018.