The Sale of Mark and Marjorie Allen’s Estate

On July 1, the morning after the first session of the sale of Mark and Marjorie Allen’s estate at Pook & Pook, an image of a large pine server with well-worn blue paint was posted on Instagram announcing its price of $15,120 (includes buyer’s premium), well over the $2000/3000 estimate. The news provoked a slew of comments on Americana Hub, a gathering place on Facebook for scholars, collectors, dealers, and anyone interested in Americana, with nearly 1200 members. 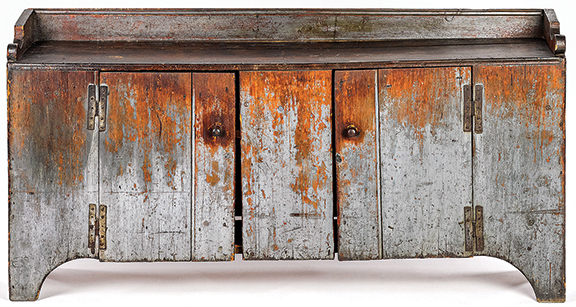 “I’d like to see it before they cut the top off” was the first comment. “Money and ego are a dangerous combination at auction” was the second. “Buyers with more dollars than sense” came next. “Good Grief,” read another, followed by “OMG, where is the sense of it?” “Two collectors must have wanted it,” wrote someone else. These comments caused Pook’s auctioneer and appraiser Jamie Shearer to ask in his post, “Will we have to ask select individuals to confirm if a bid is acceptable?”

It is unlikely that the cupboard went to the trade. What dealer wants to lug a piece more than 6' long to shows? It probably fits perfectly into a spacious country house, as it did at the Allens’ home. The color is bright, and the weathered wood has a rich patina. It holds a lot, but so does the Rhode Island bonnet-top cherry chest-on-chest that sold for $3276 (est. $5000/9000). The chest-on-chest has new feet and finials and an impressive presence.

Pook & Pook’s June 30 and July 1 estate sale for Mark and Marjorie Allen provided a good barometer for middle-market Americana. There was keen competition for some lots, and, as always, there were bargains. The sale brought a total of $667,421. Presale estimates were $321,600/521,050 (without buyers’ premiums). Fewer than a dozen bidders were in the salesroom; 68% of the lots sold to the Internet. Dealers usually put their best finds in inventory and take home pieces with minor problems that look good and fit their needs. 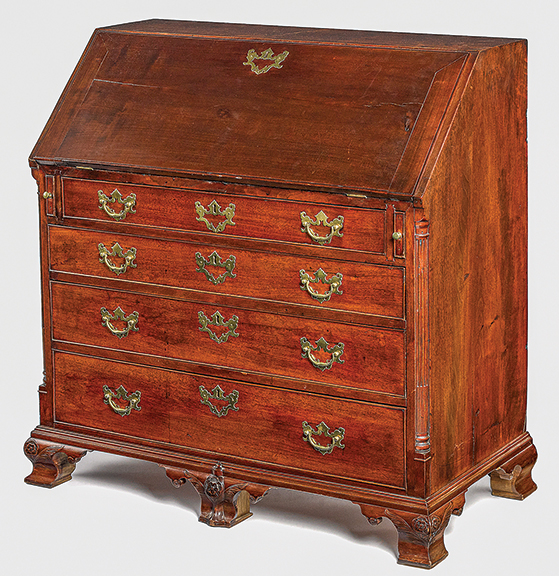 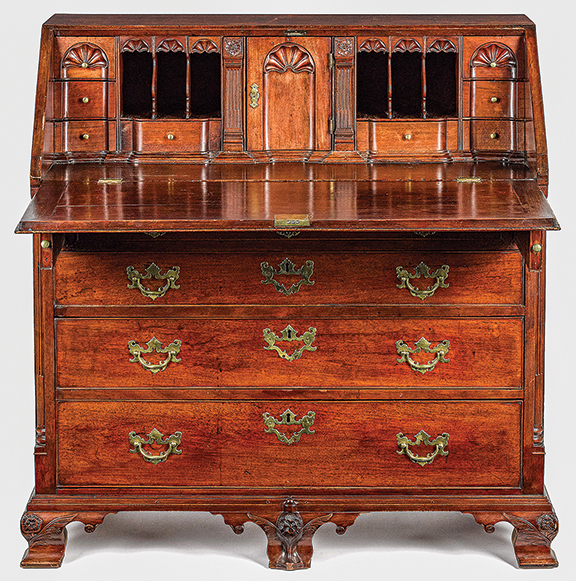 The blue-painted server was not the top lot of the sale. Two lots brought more. The first lot in the sale, a walnut slant-front desk attributed to the workshop of Thomas White, Perquimans County, North Carolina, with shell carving in its interior, was pictured in John Bivins’s article in American Furniture 1999 on Rhode Island’s influence on the work of two North Carolina cabinetmakers. The desk sold for $22,680 (est. $12,000/18,000). Allen had bought it from Bill du Pont. Allen was one of du Pont’s suppliers of early brass candlesticks, which were sold at Sotheby’s in January.

On day two of the Allen sale, a 15' high J.W. Fiske cast-iron and zinc garden fountain, circa 1875, brought the same price as the desk. It had a central column with large putti figures under a bowl with lion masks, more putti figures with shells, and a large central cornucopia supported by putti figures with fishtail feet, and the whole thing was topped with a goddess figure holding a ewer and a goblet. It sold on the phone for $22,680 (est. $10,000/20,000) even though it was not available for preview and had to be picked up in Roseboom, New York. 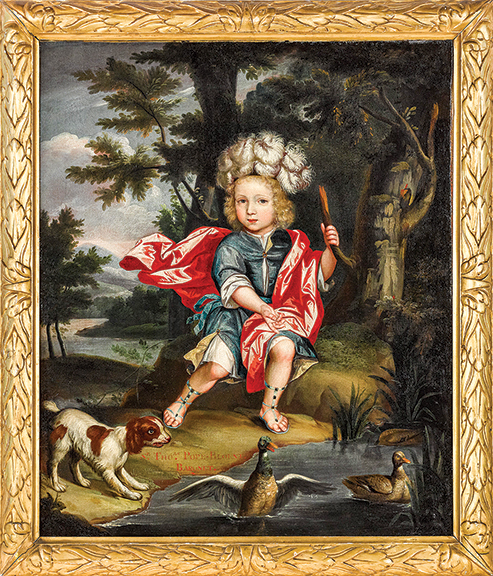 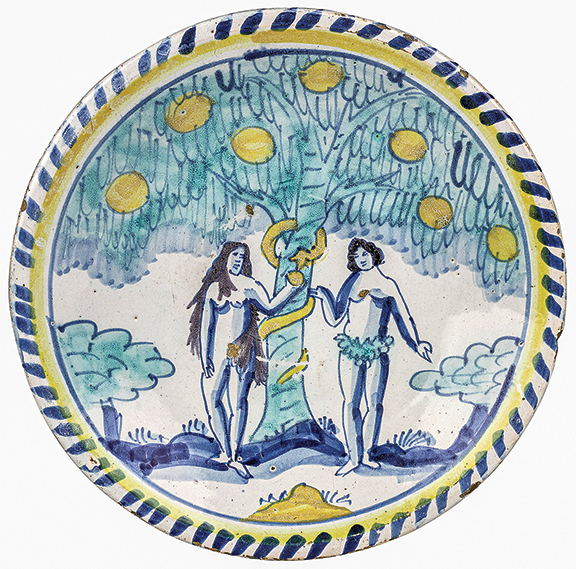 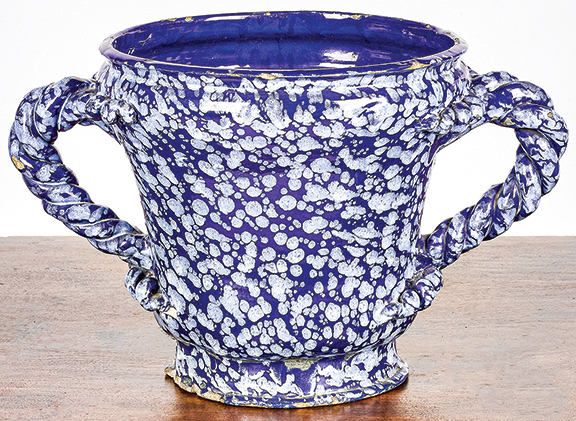 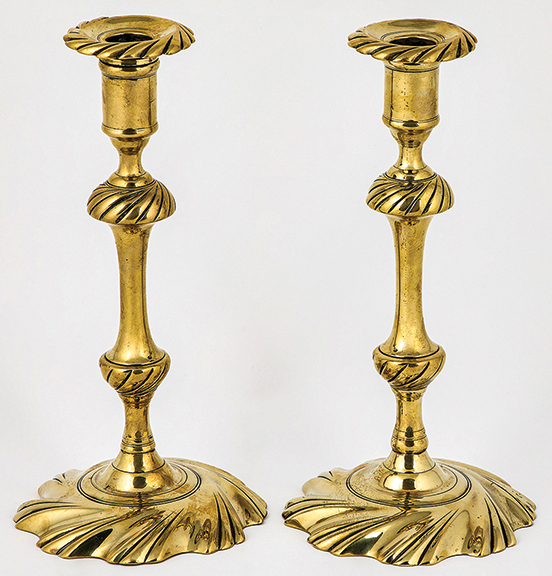 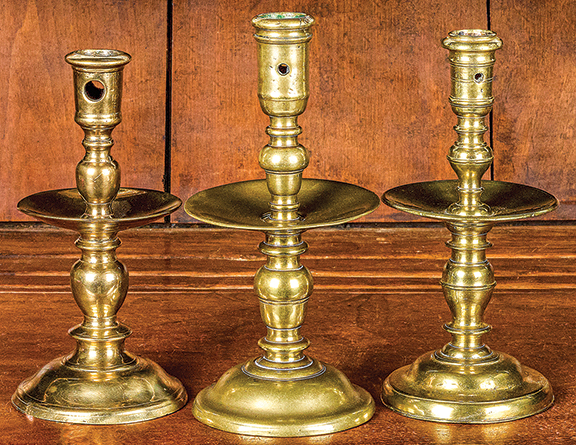 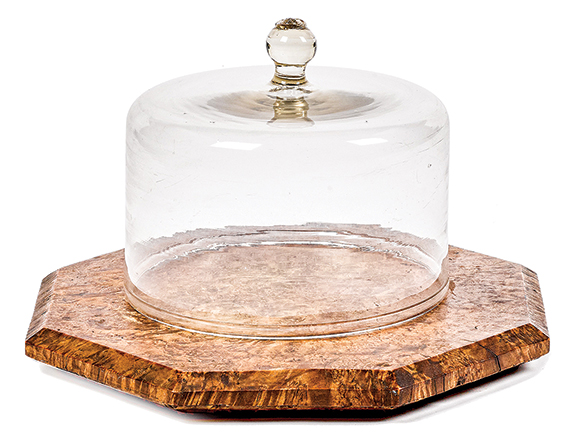 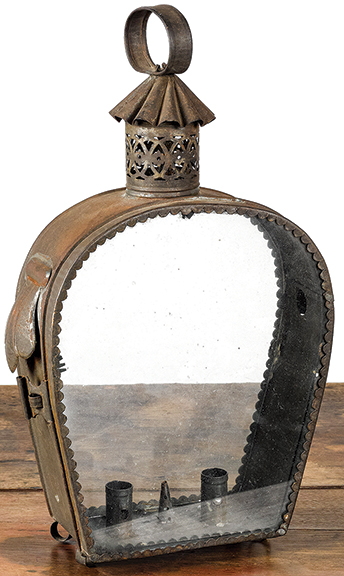 Estate sales are a rite of passage. Marjorie and Mark Allen’s family wrote a tribute for the catalog describing their beginnings as antiques dealers in 1975 and their early years as show dealers until they became regulars at high-end shows. They rarely missed a Delaware or Brandywine show, and they developed a following among collectors in the Delaware Valley, which was why Pook & Pook in Downingtown was the logical choice to auction their collection.

Marjorie (1946-2014) and Mark (1944-2022) Allen both had careers as academics and enjoyed the cultural history that antiques provide. In time, buying and selling antiques became their full-time business. In the mid-1990s, they moved from New York state to Amherst, New Hampshire. They eventually built a modern house on Squam Lake and filled it with antiques.

Their dream house was the subject of an article published in the Autumn/Winter 2010 issue of Antiques & Fine Art magazine. Johanna McBrien’s illustrated article can be found online (www.afanews.com/articles/item/1653-touching-history). The large blue-painted sideboard is pictured with a caption saying that the couple purchased it from a Connecticut dealer many years ago, and that it retains its original knobs and a fabulous surface and never had an upper section. (Those who examined it at Pook said saw marks suggesting that it did once have a top built in one piece, but it still had an impressive presence.)

Comparing the pictures in the article with those in catalog, it appears that the Allens’ daughters kept a few things they could use but sold most of their parents’ collections, including the plates with their names made by potter Greg Shooner.

This huge J.W. Fiske cast-iron and zinc garden fountain, circa 1875, with putti figures and topped with a goddess holding a ewer and a goblet, 15' high x 6' diameter, was offered in as-found condition and was not available for preview at Pook & Pook. It had to be picked up in Roseboom, New York, within 30 days of the auction. One of the putti on the stem had been recast. The gray paint was added as a primer to keep the fountain from rusting. Its internal plumbing has been replaced by an antique cast-iron restoration specialist. It comes apart in six pieces. Believed to have once been in the center of a traffic circle in New Hampshire, it sold for $22,680 (est. $10,000/20,000). 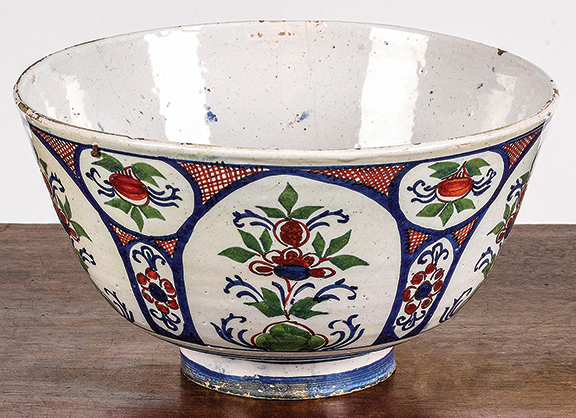 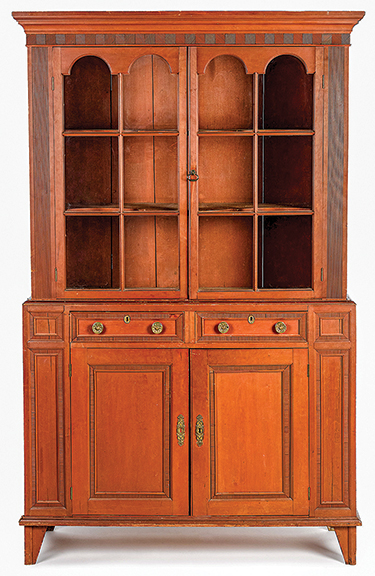 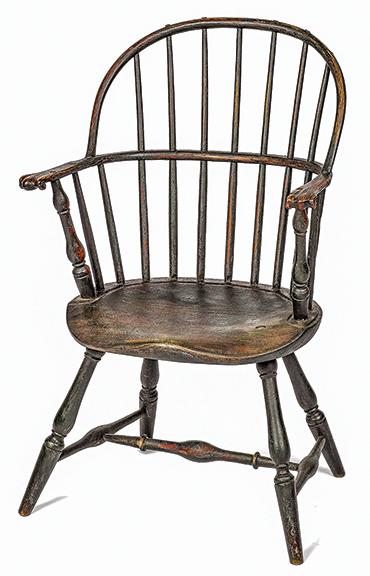 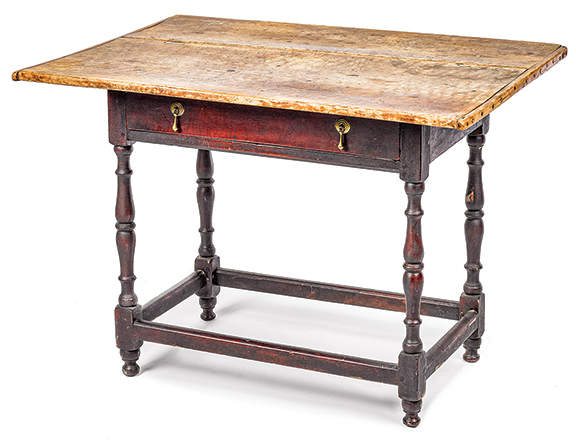 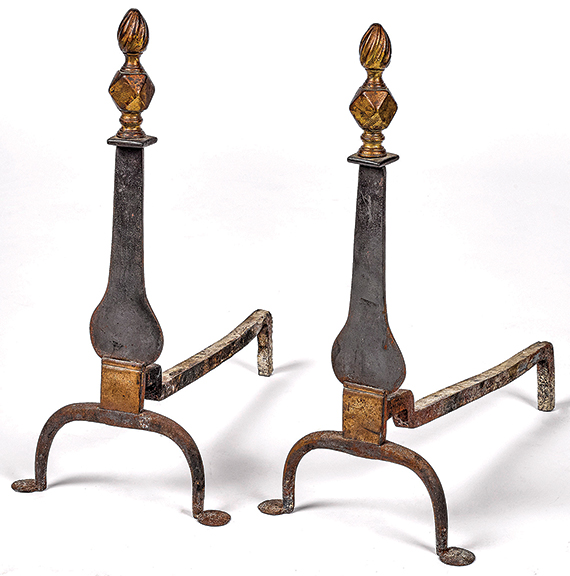 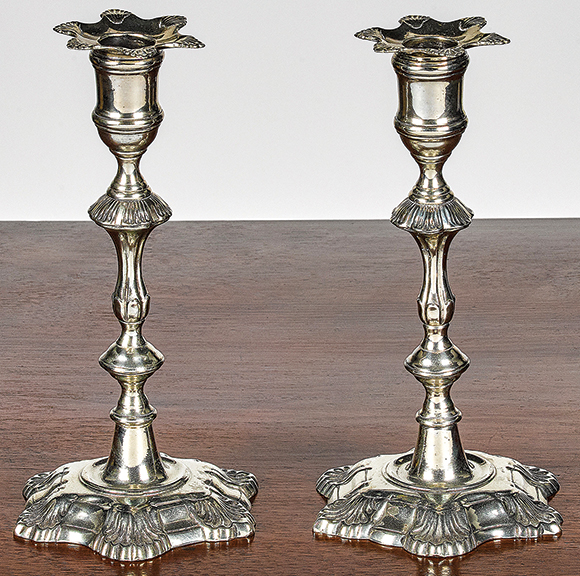 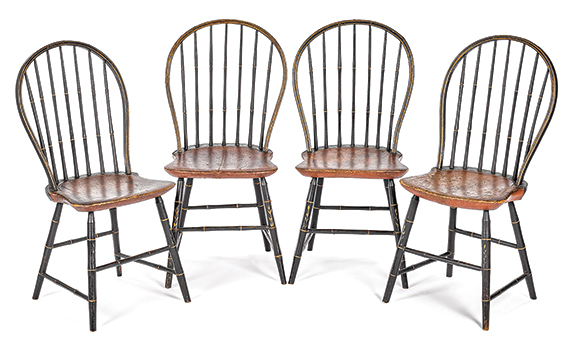 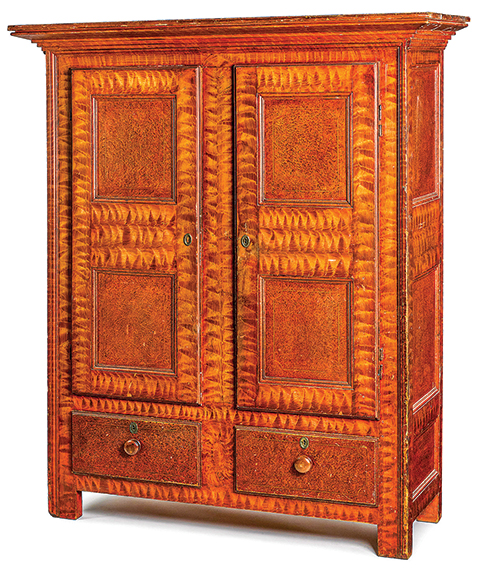